Unlikely things happen all the time.

Here’s an example. Let’s say you are rolling a 20-sided dice. You probably won’t roll a 20. I mean, you might, but you have a 1-in-20 chance, which is only 5%. This argument works for any number on the dice. Yet, you will roll some number between 1 and 20. No matter what you get, it was unlikely… but at the same time, you were bound to get an unlikely result. Weird, huh? 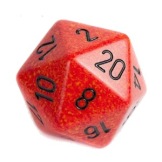 So, don’t worry! 99% of the time you will be just fine. Just don’t roll the dice any more than you have to—it’s a pretty boring game without any apparent reward, anyway—and try not to worry too hard, because statistics is on your side. Right?

You’re curious, though. You wonder… how many times would you need to roll the dice for it to be more likely to get that 100, just once, than to avoid it completely? If you do the math1, you’ll find that 69 rolls puts you above the 50% mark. In other words, you are more likely than not to get a 100 if you roll 69 times.

Contraception fails much more often than 1% of the time.

Every time a woman has sex with a man, she rolls a dice. Depending on her contraceptive method of choice, or lack thereof, her dice has a different number of sides on it. But each roll always holds the possibility of pregnancy. Depending on her work, health, and insurance situations, she could be out a lot more than $10,000 in the coming year, not to mention having a child to raise.

Is your dice a condom? If you use them perfectly, that’s a 2% failure rate over one year. You only need to roll 35 times to be more likely than not to get pregnant2.

Is your dice a birth control pill? If you use them perfectly, that’s a 0.3% failure rate over one year. You need to roll 231 times to be more likely than not to get pregnant2.

This is the absolute best case scenario for these common contraceptive methods. It is why methods like implants and IUDs with extremely low failure rates of 0.05–0.2% are gaining popularity. It is also why emergency contraception exists—think of this as a second “bonus dice” you can roll if you get unlucky with the first one.

We can play this game all day. Women play this game their whole reproductive lives. You can’t take our dice away. You can’t tell us not to roll (well, you can try, but it does absolutely no good). But apparently some employers can deny us access to certain dice and virtually all bonus dice based on a “sincerely-held belief” in junk science.

And yes, women could ignore our employers’ preferences, save our hard-earned money, and go buy whichever dice we like. But this game has a different set of rules. Suddenly we have to be able to afford the dice we want. Suddenly it is not the same game other women can play for free.

Someday, I hope all women (and men!) can have free access to all manner of highly effective, side-effect-free, reversible birth control. I know that doesn’t seem very likely to happen any time soon. But then again, unlikely things happen all the time.

2 Statistics from this site. Note that per-year failure rates are not necessarily the same as per-roll failure rates. Contraception failure rates are typically calculated as “the difference between the number of pregnancies expected to occur if no method is used and the number expected to take place with that method,” so while this analysis may not be completely sound, the take-home message is unchanged: highly effective birth control is incredibly important.

Have you ever watched rain fall on the pavement? It makes a beautiful, seemingly random pattern. No drop is more or less likely to fall in a spot where another drop has fallen.

Let’s say you wanted to collect as much water as possible during a 30-minute rainfall. What kind of bucket would you make? Tall, short… wide, narrow… orange, green… hot, cold… raised above the ground, in a hole… what would you do?

This is the exact situation astronomers face when designing telescopes. Only instead of rain, we are trying to collect drops of light – called photons. And instead of setting a bucket in a rainstorm, we put a mirror in a dark location and hope for clear skies.

If you took a minute to think about it, you probably settled on using as big of a bucket as possible to collect the most rain. The width of the bucket, or its area on the ground, is more important than its depth, so long as it isn’t going to overflow. And the color, temperature, and height above the ground don’t really matter. This is exactly why astronomers are partial to huge telescopes! The most important part of a telescope is its primary mirror, which is like a bucket for light. Giant mirrors don’t really give us a more “zoomed in” view of the cosmos, but they do let us collect more light – just like a big bucket will collect more rain. Photons of light are always raining down from the cosmos. Bigger mirrors mean more photons, and more photons means fainter stars and galaxies are visible.

There is another way to get even more rain, or photons, too, of course: leave your bucket out for more than 30 minutes. Maybe even leave it out for hours on end, and carefully set aside all the water – or light – you collect until you can add it all up later. The faintest, most distant galaxies are only visible to those with a big light-bucket and a lot of patience.

As it turns out, falling rain and incoming photons can both be described by a special set of mathematical rules called Poisson statistics. Each drop hits the ground in a random spot. But the sum total of all of these random events is predictable. So, If you make a graph of raindrops hitting a bucket, or photons hitting a telescope mirror, you get a special shape: a Poisson distribution.

Astronomers use this to know how long we need to stare at a distant star or galaxy, or how big a telescope we need to use. Poisson statistics tells us that the quality of telescope data for a star emitting N photons will be 1/√N. (We like to say the uncertainty, or “standard deviation,” is √N.) This is great news! If you spend some time looking at a star and collect 100 photons, your uncertainty will be 10 photons, which is 10% of 100. That’s not very precise. But if you stare at it longer – or trade up to a bigger telescope – and collect 1000 photons, the uncertainty will be about 32 photons, which is only 3%. Much better.

The next time you look up at the night sky, remember that your eyes are miniature telescopes. Or perhaps fun-sized light-buckets. How much starlight can you collect?